Former Miss Iraq has twitter spat with Rep. Omar and says ‘We call her the Muslim Brotherhood’

Sarah Idan crowned Miss Universe Iraq in 2017 and now a peace advocate came under attack from Rep. Ilhan Omar (D-Minn.) after her interview on the “Sarah Carter Show” on Aug 4. Idan spoke during the interview of unfolding events after she had posted an Instagram photo of herself with Miss Israel, Adar Gandelsman, during the 2017 Miss Universe pageant in Los Vegas, as a show of “peace.” Her family was forced to leave Iraq, and Idan who has received death threats is under intimidation from the Iraqi government to have her citizenship revoked.

During her interview with Carter, Idan who is a moderate Muslim mentioned she is concerned American congresswomen like Omar, are not representative of moderates.

In a tweet on Thursday, Omar replied, “Hey, I might be wrong but I don’t think you are a #MN05 resident and like that makes me not your representative.” 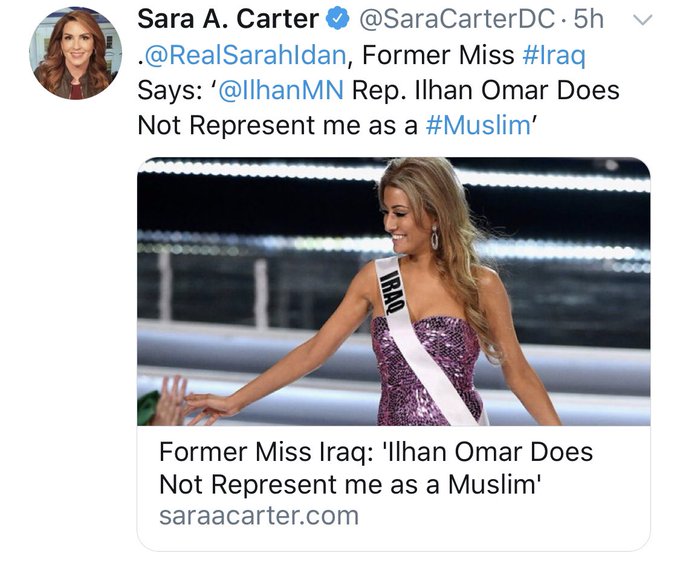 Idan responded with a tweet, “Seriously Ilhan Omar this is your intellectual comeback? I sad as a MUSLIM! I don’t stand for your anti-American, anti-Semitic, Muslim Brotherhood agenda using this democracy to further YOUR & YOUR FRIENDS Islamic socialism goals of dividing & weakening our country.”

Seriously @IlhanMN this is your intellectual come back?
I said as a MUSLIM! I dont stand for your anti-American, anti-Semitic, Muslim Brotherhood agenda using this democracy to further YOUR & YOUR FRIENDS Islamic socialism goals of dividing & weakening our country. @SaraCarterDC https://t.co/H4OYrdM9Y6 pic.twitter.com/7CuYDy44DF

Idan, as an “ambassador for peace,” spoke at the Human Rights Council in Geneva on June 26, after being invited by UN Watch, a pro-Israel monitor group. She criticized media bias against Israel and anti-Semitism taught in Muslim countries, condemning the acts of terror committed by Hamas and the human rights abuses under the Iraqi government. “Sadly hatred and intolerance are reinforced by biased media,” she said.

On July 10, Idan tweeted: “2 weeks ago Iraq denied my statements at the UN that I don’t have freedom to speak about Israel; now they’re taking my citizenship. This is inhumane. I’m speechless…”

Yair Netanyahu, the son of Israeli Prime Minister Benjamin Netanyahu replied with a tweet, “We love you in Israel! You have a lot of fans in Israel, America, and around the world!” he wrote, according to Israel Hayom, and Idan replied: “Thank you, Iraq wants to do to me what they did to Iraqi Jews back in Farhoud: take my citizenship & not allow me to return. I must fight to keep it [because] this is a fight not just for my rights but also against anti-Semitism. Hope both Israel & US step in to fight this decision.”

Hillel Neuer, the executive director of the watchdog group UN Watch, tweeted, “I urge all government officials & lawmakers who follow me to please speak out against threats from Iraq to remove the citizenship of Miss Iraq as retaliation for her courageous UN testimony in support of Arab-Israeli peace. Baghdad must hear our protests in time.”